RudyBooks
Published by Lenda Rudy Massamba in Economics · 11 December 2019
Tags: Patent, Technology, Robotics
Thérèse Izay Kirongozi is very famous worldwide for having developed the world's first solar-powered traffic robots, although she's working in a difficult environment which is not suited for such a feat. She attracted the attention of all kinds of media, and is still fascinating the world with her invention. Has she patented it, though? This is an important question because there are vultures around the world ready to steal other people’s groundbreaking ideas.
Thérèse Izay Kirongonzi and her team built the first traffic robot in the world in 2013. These humanoid traffic robots can rotate their chest and raise their arms like a human traffic officer would do to stop vehicles in one direction, and allow their flow in another direction. In 2015, she unveiled even more advanced traffic robots. However, in 2017, in Indore (India) a robot that looks like the Congo-made ones was unveiled to the public! It is quite interesting to notice that the features of the Indian robot are very much inspired from the Congolese robots. The Indian traffic police robot was developed by Techno Skill Academy in association with Venkteshwar Institute of Technology. 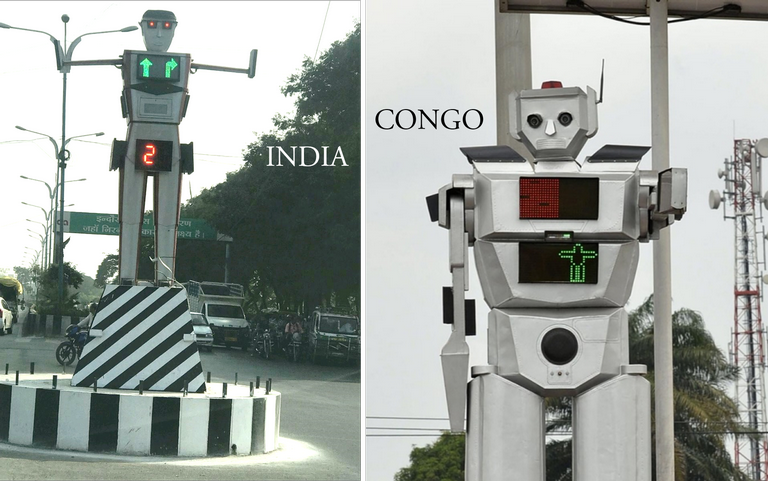 Source: N/A
Thanks to social media, among others, it is clearly impossible for the Indians to claim that they manufactured their robot before the Congolese. Yet, it is important that African inventors and innovators learn how to protect their intellectual property so that they retain full ownership of their inventions and innovations. This is why African inventors keep on asking for both political and financial support to their “rulers” in order to contribute significantly to Africa’s industrial development.
How many great ideas were developed by Africans, but materialized in developed countries at the expense of the true innovators or inventors? It would be interesting to have such a study, if it exists! In the meantime, African countries should now seriously think about encouraging endogenous technologies. Why is it, for instance, that African countries keep on relying on imported traffic lights that must be connected to the national power grid while Africa is sunny? Africans must shed their inferiority complex if they want to stand out in this world.